skip to main | skip to sidebar

The Man from O.R.G.A.N. by Dick Hyman 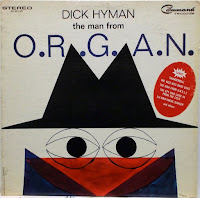 I saw this on Dusty Groove in their bachelor pad/space age section (called Now Sound) and then tracked down an eBay copy from a Danish seller which was in better shape than the Dusty Groove one (sorry, boys) — it's also a white label promo copy, so an early pressing and therefore more sought after. (Early copies off the stamper should sound better.)

The album is on the Command label, famed for both their wacky abstract cover art (Mike Gething of Little Amber Fish is a big fan) and their high tech stereo sound — "Command Records will delight the most discriminating audiophile." There is a reassuring block of text on the back cover detailing Technical Data. Telefunken microphones, check; Ampex tape recorder, check; Westrex cutter, check; Scully lathe, check. On to the music... 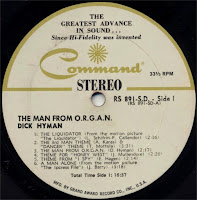 Hyman, a well-known keyboard wizard, plays the Lowrey electric organ here. The album opens with a superlative version of Schifrin's 'The Liquidator'.

Less welcome is 'The Third Man Theme'. I've always hated that £*%^@ zither atrocity, and it's no better here with the zither absent (I say this in the full knowledge that it is a beloved classic and has sold gazillions of copies).

The title track is an improvement, though it's a bit of a country & western oddity. 'Honey West', with its noirish slant is much superior. 'I Spy' is a sort of a sound drama with snatches of dialogue and traffic effects. Indeed Hyman subtitled the arrangement 'Tone Poem of a New York Traffic Jam'. It doesn't have the fluidity and appeal of comparable efforts by Kenyon Hopkins or Roland Shaw, who can make sound clips seem part of the music rather than jarring interpolations. 'I Spy' still has a pulsing appeal, though it sounds to me like the fade out was cut off by some ham fisted chump. All the Telefunkens and Ampexs in the world won't save you from clumsy human intervention. 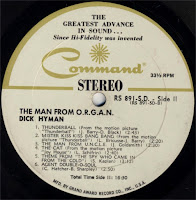 'Man Alone' by John Barry from The Ipcress File is lovely, displaying some particularly nice guitar by Tony Mottola with a bossa feel.

If not for the Third @£$$%^ Man this would be wall to wall high quality spy music. 'Thunderball' has a galloping, almost Spaghetti Western feel (more guitar, this time by Al Casamenti) with some wailing high pitched sputnik electric organ — apparently achieved by using the "piccolo attachment."

The third Barry track, 'Mister Kiss Kiss Bang Bang' is another highlight, with the whispered accompaniment more effective than the intrusions on 'I Spy'. Schifrin's 'The Cat — Theme from Joy House' isn't about to supplant Jimmy Smith's take, but it has a pleasant 1960s science fiction feel. 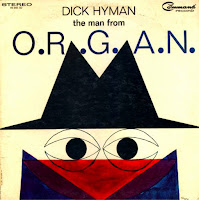 'Agent Double-O Soul' is equipped with some nicely groovy female vocals. You can almost see the singers gyrating in their giant giant birdcages, mini-dresses lit up by the psychedelic colour splashes of the oil lamp. Again with the abrupt cut-off, though.

There is the occasional bit of very light noise on my LP — some tics deep in the grooves. And the vinyl has a tiny warp. But this copy is probably as good as it gets. A keeper.

(Image credits: all from Discogs. Thank god this isn't my copy with the grubby labels.)
Posted by Andrew Cartmel at 16:23 No comments: 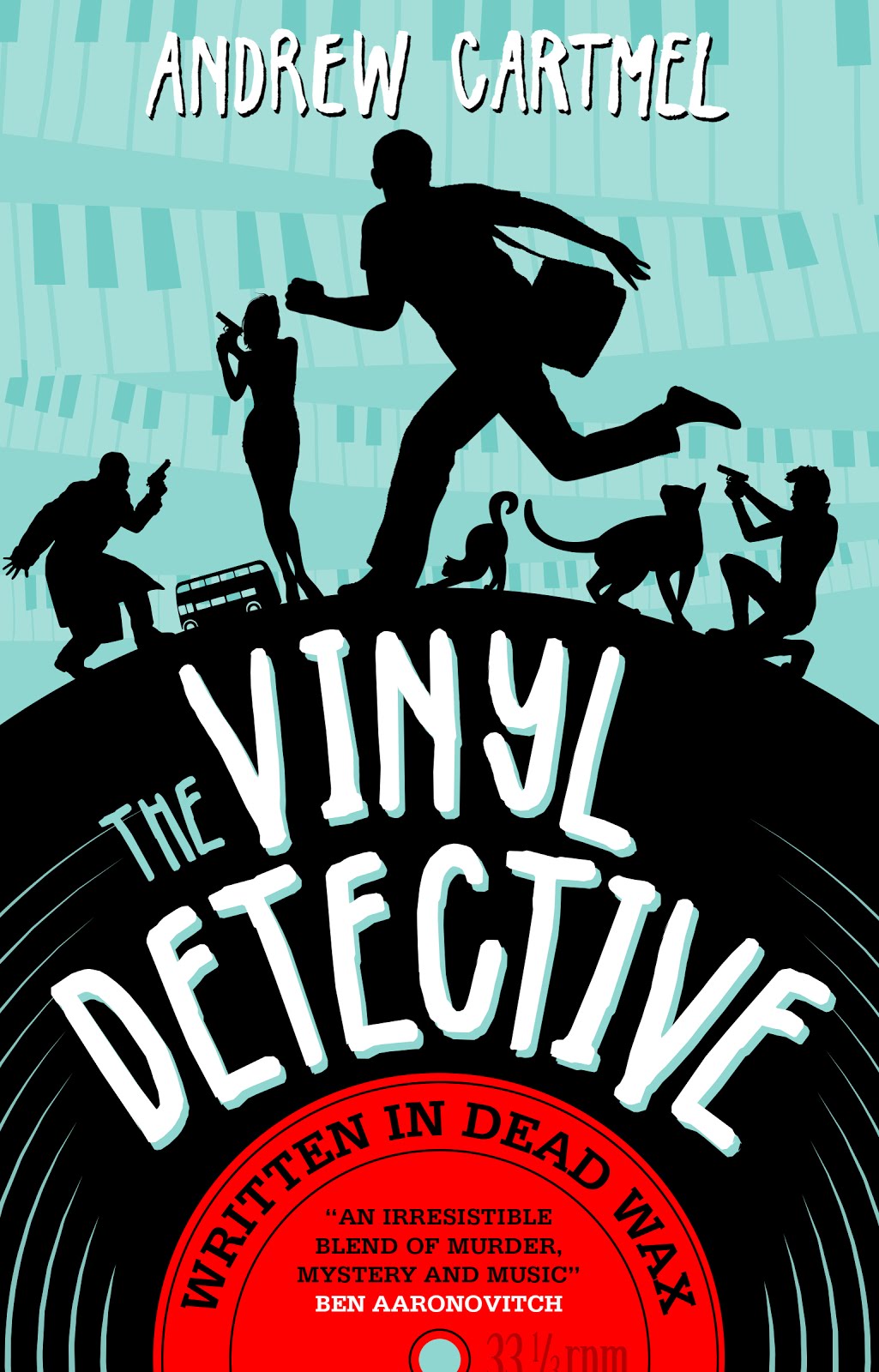 Cover art by Martin Stiff for the first in my new series of crime novels — due out from Titan Books in May 2016.

Andrew Cartmel
Yes, I am that Andrew Cartmel. The one with the Doctor Who connection, with the masterplan. I'm not currently posting about those areas of my life (well, not much), but I do blog about writing , music and food. Thanks for dropping by.